What’s been happening in Room 24? 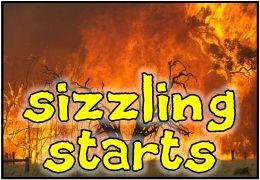 In English, the students in room 24 have begun to explore the Seven Steps to Writing Success. As a part of the program, the Year 3’s have been learning to write Sizzling Starts, which encourage them to begin their writing in interesting ways rather than the typical “once upon a time”, “long ago”, “on the weekend” etc. The students are asked to begin their writing at a moment of action, not at the beginning of the day where nothing is happening. To begin when the volcano starts oozing lava or as the whistle blows to start the basketball finals. The students have learnt strategies such as starting with a sound effect, dialogue, a question, or something that inspires curiosity in the reader. The students have been writing many sizzling starts and getting quite a collection, which will be very beneficial for them to use and expand upon as we progress through the Seven Steps to Writing Success program.

Here are some of the students’ favourite sizzling starts that they have written:

No I said to myself when our teacher told us that someone had to go to the principal  office. Because it was me I was crying with my hands over my eyes it was so super super terrifying. I was quivering so much that my lips went blue. I walked up to his office. I slowly opened the door.- Taya

“You need to go to the principal’s office”. “Why”? “Just go ok”. Rose tiptoed down the corridor her teeth were chatting. She knocked on the door. It slowly opened.” Why are you going on a holiday”. Sniff sniff. “because I don’t know”. “That’s all I wanted to say”. “Really”. “Yes now you can go back to class”. KNOCK knock knock “come in”. “So what did the principal say”. “Why are you going on holiday”.  – Sophie

Splash! I thought everyone was inside said Mum. We all are said jack Ollie and Jaidee. It might be dad said jack. Dad’s at work said Ollie. Yeah said Jaidee. Let’s go look at the pool my two soccer players and my princess said Mum. Well would you look at that it is Mr Fluffy our guinea pig. – Ollie

Have you ever wished you had a superpower? Well I do I would like super speed,  laser eyes and super strength I want them because they are my favourite superheroes powers so I want their powers ok so I train every day till I get all the power so I was unstoppable forever and ever for eternity. – Mia

Taya dared me to walk up to the haunted house. Sweat was dripping down my face, I was Shivering.  My teeth were chattering.  The gate screeched really loudly.  I took really slow steps. I really didn’t want to do it. Soon I was at the front door. I slowly knocked on the door. I could hear the …screeching of the floor boards. – Jing

Noooo, yelled  Hannah! She was sentenced to the principal’s office. Hannah didn’t know what she had done wrong. But she went there anyway. She walked very slowly. She put her hands over her face with tears dripping down her cheeks. This was the worst day to go to the principal’s office because it was her birthday!! Then she knocked on the door. But when she opened the door everyone in the school surprise!!! – Hannah

The invasion started! Giant castles turned into ginormous robots that moved and magical pirate ships among the seas with propellers and they were throwing arrows. One was brave enough to sound the alarm and called other ginormous robots also. – Alby

I lived in a city. A very unusual city.  My city was floating. Balloons on chains were holding us above the earth. One day we floated so high we went through the clouds it was so cool. – Ashton

I heard a sound by the haunted house. As I crept up to the door it immediately opened. AHHH!!!I fell down in fright. Ow it pinched me and I don’t know if there is any more door’s. I walked in shock.  There were no door’s but there was a window.  I broke the window… – Billie